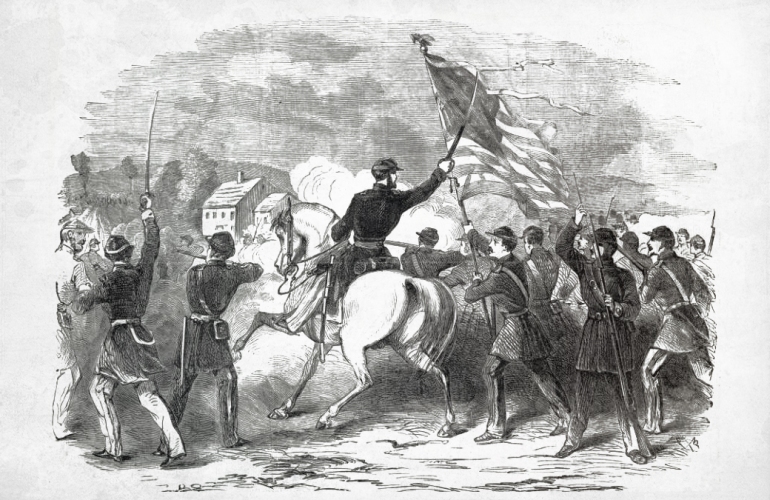 Jackson, who would go on to earn the nickname “Stonewall” and become one of the Confederacy’s most famous generals, deployed his men and four artillery pieces in Patterson’s path just south of Falling Waters. A brief fight erupted, Col. J. J. Abercrombie’s brigade turned Jackson’s right flank, and Jackson fell back. After two miles, Patterson broke off pursuit and ordered his men to make camp.

“On reaching the vicinity of Falling Waters I found Federal troops in the position indicated by Colonel Stuart. I directed Colonel Harper to deploy two of his companies, under command of Major Baylor, to the right. The enemy soon advanced, also deployed, and opened their fire, which was returned by our skirmishers with such effect as to force those of the enemy back on their reserve. From house and barn which we took possession of an apparently fell back. Soon the enemy opened with his artillery, which Captain Pendleton, after occupying a good position in rear and waiting until the advance sufficiently crowded the road in front, replied to with a solid shot, which entirely cleared the road in front.”

“The skirmishers, sustained by the left four companies, turned the right flank of the enemy, and with the assistance of the artillery, drove the enemy’s right flank in, and routed them from the woods. The whole regiment was then rallied on the color company, and deployed immediately to the front and in advance of the column as skirmishers, sustaining such position until a halt was made by the whole column.”

“The enemy, seeing this movement, and being pressed by Abercrombie, retired, hotly pursued for four miles by artillery and infantry. The cavalry could not be employed, on account of numerous fences and walls crossing the country… This brush was highly creditable to our arms, winning as we did the day against a foe superior in number to those engaged on our side.”

The skirmish at Hoke’s Run allowed Brig. Gen. Joseph E. Johnston’s Army of the Shenandoah to slip away and reinforce P.G.T. Beauregard on July 21st at the First Battle of Bull Run, which turned the tide of that battle in favor of the Confederates.

Read primary sources from this dramatic event in American history: