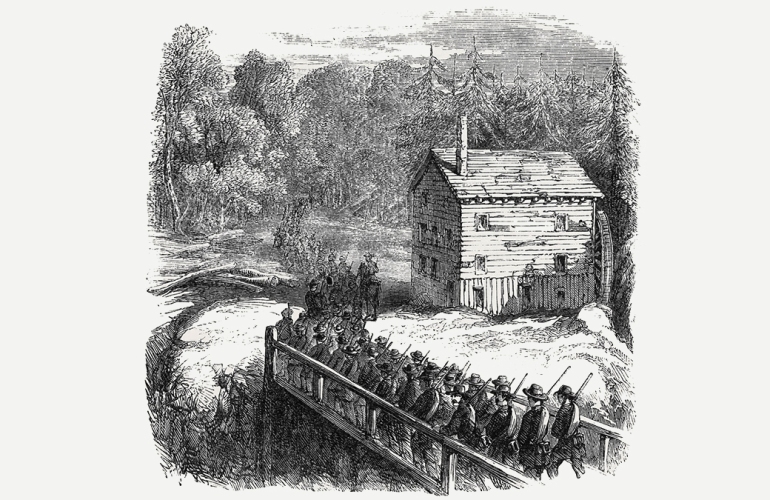 A grist mill on Four Mile Run in Arlington County, Virginia was a prominent landmark along the Columbia Turnpike, approximately four miles southwest of Long Bridge over the Potomac River and 12 miles east of Fairfax Court House. In the early morning hours of Saturday, June 1, 1861, Union and Confederate forces clashed around the Fairfax Court House grounds. The Union cavalry was forced to retreat, but not before Confederate Capt. John Q. Marr became the first Virginia officer killed in action in the American Civil War.

Under cover of darkness, a small contingent of Virginia militia from an unidentified unit crept within eyesight of the mill and opened fire, mortally wounding private Henry S. Cornell and hitting Joseph Cushman, both of the 11th New York, in the thigh. As he lay dying, Cornell reportedly exclaimed, “Who would not die a soldier’s death?”

The Union troops fired back, wounded one Confederate before the attackers melted back into the darkness. Though minor compared to the bloodbaths to come, the skirmishes at Fairfax Court House and Arlington Mills convinced Union war planners to proceed more cautiously. They would not advance deeper into this part of Virginia until mid-June.

One thought on “160 Years Ago Today: Engagement at Arlington Mills”