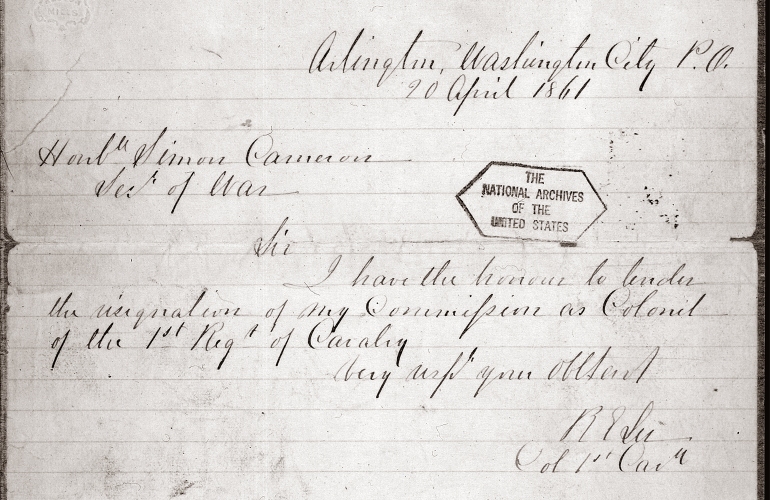 President Abraham Lincoln’s call on April 15, 1861 for 75,000 volunteers to “suppress the rebellion” in six Southern states inflamed passions in states like Virginia, which had, until that time, resisted calls to secede and join the nascent Confederacy.

On April 17, the Virginia Secession Convention voted in favor of secession, subject to a popular referendum to be held on May 23, 1861. The Lincoln Administration saw secession as illegal and was eager to secure the loyalty of prominent Virginians like 54-year-old Col. Robert E. Lee, a respected U.S. Army officer whose example could sway many to one side or the other.

On April 18, Francis Preston Blair, Sr., a prominent newspaper editor, met with Robert E. Lee in Washington, DC to convey President Lincoln’s offer to command the volunteer army then gathering under the Union banner. Lee declined, saying: “Mr. Blair, I look upon secession as anarchy. If I owned the four millions of slaves at the South, I would sacrifice them all to the Union; but how can I draw my sword upon Virginia, my native State?”

Lee then went to visit General Winfield Scott, a fellow Virginian and longtime friend, to formally decline the president’s offer. Though no record of the meeting exists, Scott supposedly replied, “Lee, you have made the greatest mistake of your life; but I feared it would be so.”

Two days later, on April 20th, Lee resigned his commission in the U.S. Army. His letter to Secretary of War Simon Cameron was short:

He wrote a longer letter to Winfield Scott:

Genl,
Since my interview with you on the 18th Inst: I have felt that I ought not longer to retain any Commission in the Army. I therefore tender my resignation which I request you will recommend for acceptance. It would have been presented at once but for the struggle it has Cost me to separate myself from a Service to which I have divoted all the best years of my life, & all the ability I possessed. During the whole of that time, more than a quarter of a century, I have experienced nothing but kindness from my superiors & the most Cordial friendships from any Comrades. To no one Genl have I been as much indebted as to yourself for kindness & Consideration & it has always been my ardent desire to merit your approbation. I shall carry with me, to the grave the most grateful recollections of your kind Consideration, & your name & fame will always be dear to me. Save in the defense of my native state shall I ever again draw my sword. Be pleased to accept any more [illegible] wishes for “the Continuance of your happiness & prosperity & believe me

Most truly yours
R E Lee

In an April 20th letter to his cousin, Robert Jones, he explained:

“Sympathizing with you in the troubles that are pressing so heavily upon our beloved country, & entirely agreeing with you in your notions of allegiance, I have been unable to make up my mind to raise my hand against my native state, my relatives, my children & my home. I have therefore resigned my commission in the Army & never desire again to draw my sword save in defence of my state. I consider it useless to go into the reasons that influenced me. I can give you no advice. I merely tell you what I have done that you may do better.”

Two days later, Lee would travel to Richmond to accept Governor John Letcher’s offer to command Virginia’s Provisional Army. Despite being given the rank of full general in the Confederate States Army on June 14, 1861, Lee continued to wear the rank of colonel for the remainder of the war. He went on to command the Army of Northern Virginia and is perhaps the best-known Civil War general besides Ulysses S. Grant.